The passport design is also an art

The passport design is also an art

Nowadays competent government experts are working to stay ahead of document counterfeiters by making it more difficult and expensive to forge the passports. Modern passports can typically be characterized that they are made of special materials containing microchips as well as sophisticated, detailed graphics that are difficult to forge. Color of the optically variable ink changes when viewed from different angles, and fluorescent fibers and spots on the paper brightly luminesce in different colors under UV light. Tiny, touchable numbers and letters invisible to the naked eye, hidden by microprinting and nanoprinting in the Intaglio-printed background graphics, can also be made visible. Holograms offer three-dimensional images to use; bumpy texture can be created on a flat surface, using embossed elements and hot foil stamping. Even the string binding the passport together may flourish in multiple colors and fluoresce under UV light. For real good passport, just follow this recipe: blend the above high-tech features with a great deal of creativity and a dose of national pride, and you get a document that is not only difficult to forge, but also beautiful to the eyes. 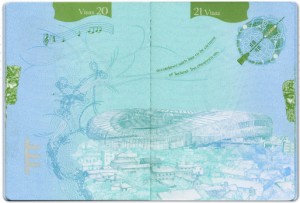 Inner pages of the Irish passport feature Aviva Stadium and several other country landscapes and sights. In this passport there are some parts of the poems from some famous poets: Nuala ní Dhomhnaill, who wrote in Irish, William Butler Yeats, who wrote in English and James Orr, who wrote in Ulster Scots.

Kiwis are famous for, among others, their world traveler lifestyle, so it is no wonder that they have beautiful passport featuring New Zealand’s unique natural beauties. Sometimes security and humor can get on well with each other. Due to the Lord of the Rings trilogy „Middle Earth” has become so popular among the tourists travelling to New Zealand that even their visa stamp reads: “Welcome to Middle Earth”.

On what basis should we select color of the passport cover?

There are no mandatory regulations and standards valid for passport colors. Passports in most of the European countries are burgundy color. In 1981 the first 9 member countries of the European Union agreed in adopting red colored cover as a common characteristic feature of their passports. Since then, passports of all 28 EU nations have become red except Croatia with its blue passport. Spokesman of the Croatian Ministry of Foreign Affairs has stated that the Croatian biometric passport introduced in June 2009 was fully compliant with the relevant EU standards. Since the so-called burgundy red passport is not mandatory in the EU countries, it is not planned to change the color of their passports. Though Switzerland is not a member of the EU, their passport is issued with red cover. In fact, it is rather bright red that refers to the color of their national flag. Interestingly the so-called Andes passport issued by member states of the South American Andean Community (Columbia, Ecuador, Peru and Bolivia) is also burgundy red color.

In the United States, you will most often see navy blue passports, but, for instance, diplomatic passports issued on the occasion of the 200th anniversary of the establishment of the US consular system are black.

Generally speaking, dark shades are preferred for a very simple reason: they hardly get dirty.

But do these colors denote anything in terms of diplomatic or visa-free aspects? Definitely not. The so-called Passport Index ranks the passports of different countries depending on how many countries can be visa-free accessed to, using their document. The navy blue U.S. passport and the burgundy red U.K. passport are equivalent: both travel documents afford their owners visa-free access to 147 countries. According to this ranking, Hungary has the 6th most powerful passport, forming a common group with Ireland, Belgium, Portugal, Spain and Norway – holders of the Hungarian passport are able to access to 141 countries visa-free.