“Music is a world within itself with a language we all understand.” Stevie Wonder

On the initiative and proposal of the world-famous violinist Yehudi Menuhin, UNESCO declared the 1st of October as International Music Day.

How does ANY Security Printing Company relate to music?

Around the world, beautifully crafted, printed products, be it banknotes, stamps or passports, feature music. One of our latest pride is the “Ludwig van Beethoven was born 250 years ago” stamp, produced by our Company, which won third place in the 2021 Music Stamp Beauty Contest. In 2011, Magyar Posta (The Hungarian Post) celebrated the 200th anniversary of the birth of Ferenc Liszt by issuing a commemorative stamp made by ANY. In the same year, the Serbian Post also issued a block of Liszt-stamps in honour of the world-famous Hungarian composer and pianist. In the world of stamps, it is worth mentioning that stamp as part of a Belgian series issued in 2000 features the world-famous Hungarian composer Béla Bartók and his manuscript music sheet. In 2013, Magyar Posta (The Hungarian Post) issued a QR-coded “sound” stamp to mark the 200th anniversary of the birth of Richard Wagner and Giuseppe Verdi. Scanning the QR-code with a smartphone takes music-loving stamp collectors to the website of Hungarian State Opera House, where they find information and music.

As we wrote in a previous blog post, the Hungarian passport visa pages show the notes of the Hungarian national anthem under UV light, giving the travel document an extraordinary look. The Irish passport contains the Irish national anthem: each page contains a melody line, so the anthem can be red in order on the pages of the passport.

Music can also be found on banknotes in many countries. On the Hungarian HUF 500 note, for example, a few lines of the Rákóczi song and part of its music sheet can be seen under UV light. On the new Albanian LEK 10 000 banknote, a section of the Albanian national anthem can be sung, while the Sudanese 2 pound note features local instruments.

Music is a universal language that transverses the world, accessible and enjoyable for all. It is not surprising that it appears in some form on a wide variety of special printed products. 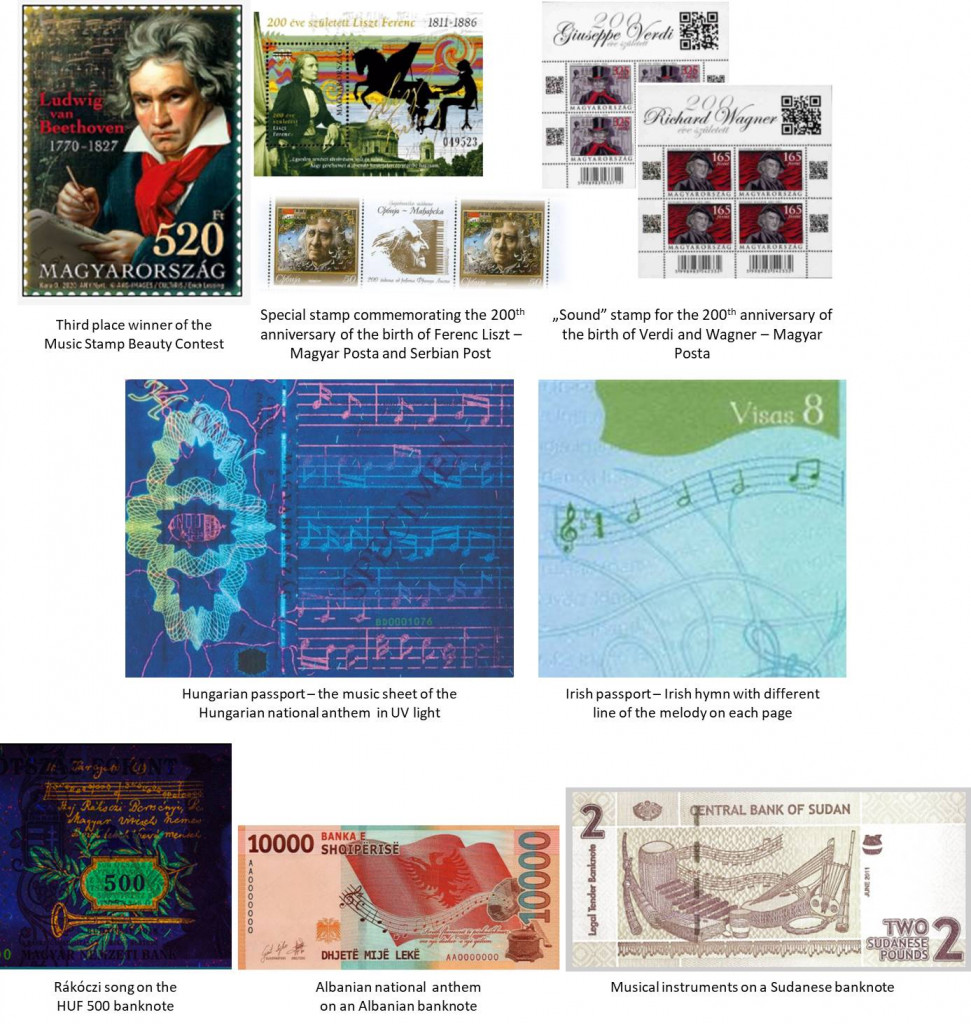