Every year, there are two days when amateur astronomers set up their telescopes in the busiest places, giving all those who pass by the chance to admire our stunning skies. Astronomy Day started in 1973 and has a history of more than two decades in Hungary. The celebration with a moving date, coincides with the phases of the moon and attracts thousands of people to these public telescope shows in spring and autumn.
On this special day, we invite our readers to travel not only through space, but also through time, as the universe and its spectacles have inspired our customers and colleagues many times since the first spacewalk. Our research goes back to the very beginning. In the early 1960s, in just a few days, workers at the former State Printing House produced a series of two stamps called Soviet Man First in Space, commemorating Gagarin’s first space flight in 1961.
In May 1980, Hungarian astronaut Bertalan Farkas also made history. In 2005, a commemorative stamp was produced to mark the 25th anniversary of his space voyage, featuring the Soyuz spacecraft as the main motif and the Balaton and Danube rivers on the surface of the Earth in the background as a reference to Hungary. The graphic is complete with the signature of our space pilot, the date of the flight and the Hungarian flag.
The name of Bertalan Farkas is also connected to another product of ours, as Magyar Posta (the Hungarian Post) issued a stamp in 2020 to commemorate the 40th anniversary of the Hungarian space flight. Some of the stamps feature the Yuri Gagarin Space Flight Training Centre, the launch of the Soyuz-36 spacecraft, the Salyut-6 space station and the return cabin of the Soyuz-35.
Not only Hungarian astronauts, but also Hungarian-built satellites have already travelled through space. A postage stamp was issued in 2012 to commemorate the successful launch of the Masat-1 artificial satellite. The special feature of the stamp is that at the time of its publication, radio amateurs could receive a special message from the Hungarian satellite.
Using a combination of offset and UV printing, we also produced an occasional stamp set based on space anniversaries and events in 2015, bringing reality and fiction to life with photographic and children’s drawing-like illustrations. By exposing the stamp set to UV light, text can be read about the events and the planets of our solar system are revealed.
In 2018, a series of stamps featuring four spectacular phenomena, selected from the diverse shapes of the Milky Way was released to support youth stamp collecting. Each of them gives a glimpse of a stage in the life of a star, and their design is a reference to the still undiscovered mysteries of humanity and space.
A few years ago, Felix Baumgartner‘s stunt inspired a sample collection of ANY bank cards. On 14 October 2012, the world-famous extreme athlete was the first person who jumped from a height of 39 045 metres, plummeted towards Earth at a speed of 1342.8 km/h, reaching 1.24 times the speed of sound, free-falling for 4 minutes 19 seconds and finally landing successfully. This achievement earned him a place in the Guinness Book of World Records. The card designs use special surface finishes, colour-changing pigments and special varnish solutions to depict the wonders of the cosmos, while at the same time escaping from earthly reality.
Over the past 60 years, the curiosities of outer space have inspired creators in many ways, and we look forward to commemorating future discoveries in the same way with our future products. 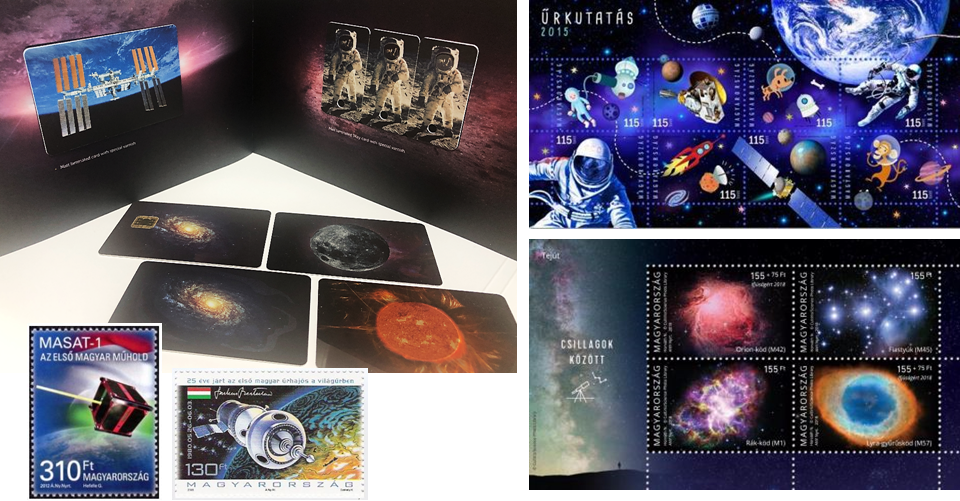