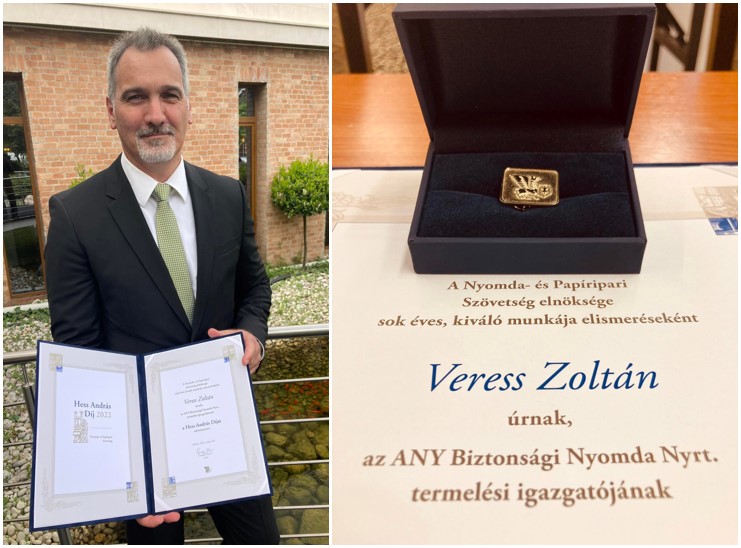 In 2022, the Hungarian Association of Printing and Paper Industry awarded our colleague Zoltán Veress, Production Director, one of the printing industry’s highest professional recognitions, the Hess András Prize. The award ceremony took place on Friday, 6 May 2022, during the Association’s Spring Economic Conference and 52nd General Assembly.

Zoltán graduated in 1990 as a letterpress and flat-bed press operator. In the early 1990s, he applied his skills in several printing companies and on 20 November 1995 he joined the former State Printing House. Thanks to his own diligence, he graduated first as a light industrial engineer and then 3 years later as an economics engineer, both of which was supported by the Printing Company.

From 2003, he was a dispatcher in the pressroom, liaising between production management and the plant units on several shifts. In 2008, he became a plant production and programming manager. His main tasks were to plan and organise short- and long-term production processes and to coordinate the work of the plants. Since 2009, he was the Production Management Supervisor, responsible for the production processes in Halom Street. Since 1 April 2018, he holds his current position as Production Director.

In addition to organising the smooth management of production, he is also responsible for the division of work and tasks between head office and the sites, as well as for subsidiary coordination. Over the past 30 years, he has been involved in numerous machinery purchases, new technological solutions and new plant developments. He has always performed excellently and accurately in our high-volume, campaign-related tasks, so he can always be relied upon to efficiently fulfil our electoral printing or priority orders. As a creative mind, he contributed to the creation of our new plant in Fátyolka Street. He was also involved in the creation of the passport for Vanuatu, which has the world’s first cover with colour graphics.

He knows everyone personally, both in the pressrooms and in the offices. He is a decisive and empathetic leader who is loyal to his job and his profession. His technical talent is well complemented by his human values and disciplined, orderly and demanding work style. His excellent sense of humour is a great asset, often helping him to get through difficult moments, and even those around him. Zoltán is married and his son Balázs is 19.

ANY Team wishes him many more years of success and congratulates him on this prize!