A “Green” passport against the pandemic… 2.0

Home/Blog/A “Green” passport against the pandemic… 2.0

A “Green” passport against the pandemic… 2.0

Last May we wrote about the opportunity of issuing COVID passports, of its meaningfulness and of its societal and economic advantages. Since then, numerous states, including Hungary, implemented such documents. 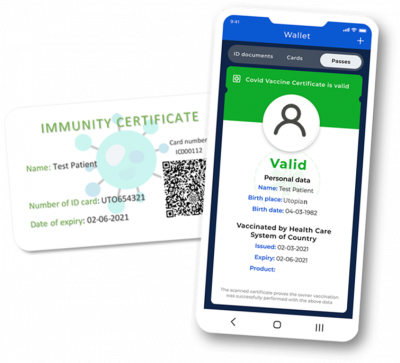 The official certification for vaccinations is not a new trend, in Hungary and other developed countries the vaccination programme of new-borns start right after their birth, the certificate of vaccination is presented in the children’s health record. The immunisation against serious diseases is of utmost importance to the society as a whole, hence the authentication of medical records during the admissions to nursery, kindergarten and schools, which are obligatory.

In case of some countries only those are allowed to travel to, who can certify their vaccination against specific diseases, such as yellow fever. For this certification, a system was developed years ago by the WHO and the related countries.

However, what is the situation of vaccinations meant to stop the COVID pandemic, and their certifications? What aspects are needed to be considered to help the society?

It is a priority that the issuance, authentication, and acceptance of the certificates shall be in a unified way, at least regulated on a national level, following international guidelines. The certificates should contain the least personal data possible, as to prevent abuse of the data, and the identification can be feasible either with a “connected” ID card, or a passport. The so-called “immunity certificate” was already implemented in Hungary, and its production, personalisation, and transportation to the post office is done by ANY Security Printing PLC. Anyone who has been vaccinated by any vaccine available in Hungary, certifiably has gone through the disease, or has antibodies can receive the forgery-proof cards containing a QR code.

In Israel not only a paper-based “green passport”, which is also accessible by phones has been implemented, but also shops, restaurants and gyms have been re-opened for those who have the passport.

To this day, there are ongoing talks and negotiations regarding the acceptance criteria of the certificates, what kind of certificates will be approved, and how. The European Union states, according to the 2021.03.17 regulation sanctioned by the European Parliament and Council on the 17/03/2021, that a new immunity certificate, related to the coronavirus, in other name green passport, is to be issued before the summer break. With this, travelling within the Union would be easier for the summer season. According to the plans, there will be a paper and electronic form of the certificate.

In the United States of America a paper-based immunity card is in the works: a QR code is printed on paper similar to the medical records, which proves its owner’s immunity. One of the main aspects is easy authentication.

There is still a lot of uncertainty regarding the virus, the duration of the vaccination’s protection, and about how and when the countries are going to re-open.

However, one thing is sure: ANY is there, ANYtime and ANYwhere, wherever it can help safe identification with its competence and experience. Together with ID&Trust, we offer a whole ImmunityPass solution to our partners, in the form of both a physical card and a mobile application, ensuring the free movement of immunised people and ensuring the continuity of the economy.